"The perfect soundtrack for your space-age bachelor pad"

"The perfect soundtrack for your space-age bachelor pad…"—WNYC 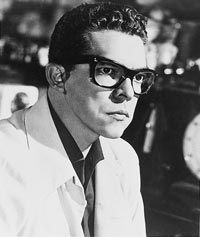 Mr. Ho’s Orchestrotica—in its “Esquivel Megaband” formation—is the world’s only way to experience the lost space-age pop music of Esquivel, live. Via meticulous transcriptions from the original mid-century hi-fi recordings, the band has recreated this masterful musician’s lost arrangements of the Hollywood, easy-latin, crime-jazz, and space-age bachelor pad sounds of the 1950s and 1960s. Featuring the music of Strayhorn, Porter, Lecuona, and others, the show exposes listeners to the wild, zany mind of Mexico’s king of space-age bachelor pad music. In stereo, of course!

Led by Mr. Ho (Brian O'Neill), a "percussion master and musical polymath" according to the Boston Phoenix, The Megband stirs up a sonic cocktail using six brass players, four woodwinds (covering 12 instruments), slide guitar, guitar, four singers, Hammond B3 organ, accordion, bass, drums, two percussionists, and Mr. Ho on piano and percussion as well. A 2011 Downbeat Rising Star Big Band with "incredible arrangements, musicianship, and artistic direction," the group has toured in the USA, Canada, Europe, and Mexico and received international acclaim for its Exotica for Modern Living series of recordings, one of which plays in over 7,000 Starbucks stores worldwide.

Yes, I missed the Esquivel revival in the 1990s (there was one).

And yes, I missed meeting him by about two years (my discovery of his music was in Keene, NH in 2004).

Fans often ask me about Esquivel and the Orchestrotica's connection to his music, so I put together a list of articles and links about Esquivel around the web (below). One of the things I've talked about a lot in our radio and podcast interviews over the year is our specific focus on transcribing his recordings from the late 1950s and early 1960s. To me, this is his best artistic output as an orchestrator, and so as a performing ensemble, the Megaband focuses on this period of his work.

I really enjoy what Esquivel did with his largest instrumentations, and as you move into the late 1960s and 70s, the music and sound changes significantly, getting a bit more kitsch to my ears and a lot less interesting. We use 22 musicians in our ensemble, primarily performing selections from his RCA Hi-Fi/Living Stereo albums. Many of these songs and their arrangements were intended for the studio only (i.e. to sell records) and had larger musician compliments than we do. In short, Esquivel was able to take a lot more liberty and "stretch out" during this period, from a musical [and likely, budget] perspective. As such, I tend to believe these recordings probably capture and showcase the truest intent of his musical mind.

On another topic, stereo, it's also worth noting that the Orchestrotica's Megaband eschews the stereo/audio aspects of his recorded music when performing it, so that audiences can really take in the full magic of his arranging and musical skills without distraction. The fact Esquivel was also an electrical engineer and a pioneer at exploiting the studio and "stereo" technology to its full effect is no secret, but I think Esquivel was just as magical in his ability to take popular dance, jazz, and pop melodies of the early 20th century, and turn them into little musical escapades that bounce across the orchestra without necessarily needing sonic exploitation. Did we take the icing off the cake? I don't think so; I think his cake tastes pretty good by itself.

Got a question or comment? Hit me up at brian@orchestrotica.com. Thanks to Irwin Chusid and Brother Cleve who informed much of my knowledge of Juan from their first-hand interactions with him. These days though, I'm pretty sure Arturo R. Jimenez probably knows more than anyone.

Brian/Mr. Ho's links and comments about Esquivel and some of the links on the web:

The Esquivel Megaband has worked with a variety of musicians from around the USA (and internationally), including: